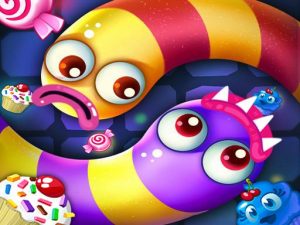 Wormate Sweetness is the original snake game with new Skins. choose your new worm skin, click Start and get right to worm battle. Play against others, Eat candies to become bigger. If your head touches another player, you will explode and then it's game over. But if others run into you, then they will die, and you can eat their candy remains! Let's have some fun!

Slither Dragon.io is an amazing game. Eat multicolored eggs from other players to grow your dragon in size. The objective of the game is to grow the longest Dragon Slither. If your dragon collides with the body of the enemies it will die.

Nebulous Game In 2015 we have seen a big rise of popularity by the games that are using cell game mechanics. Nebulous is one of many that offers such style of gameplay but we must say it is probably the best. In nebulous you grow your blob by eating small dots that are randomly placed across the level or by eating other player if that player is smaller than you. Goal is quite reasonable: you must try to become largest blob on server and stay on first place as long as you can. This game offers a lots of detailed statistic so each time you will be able to see what is your record and how to improve your play.

This website uses cookies to improve your experience while you navigate through the website. Out of these, the cookies that are categorized as necessary are stored on your browser as they are essential for the working of basic functionalities of the website. We also use third-party cookies that help us analyze and understand how you use this website. These cookies will be stored in your browser only with your consent. You also have the option to opt-out of these cookies. But opting out of some of these cookies may affect your browsing experience.
Necessary Always Enabled
Necessary cookies are absolutely essential for the website to function properly. These cookies ensure basic functionalities and security features of the website, anonymously.
Functional
Functional cookies help to perform certain functionalities like sharing the content of the website on social media platforms, collect feedbacks, and other third-party features.
Performance
Performance cookies are used to understand and analyze the key performance indexes of the website which helps in delivering a better user experience for the visitors.
Analytics
Analytical cookies are used to understand how visitors interact with the website. These cookies help provide information on metrics the number of visitors, bounce rate, traffic source, etc.
Advertisement
Advertisement cookies are used to provide visitors with relevant ads and marketing campaigns. These cookies track visitors across websites and collect information to provide customized ads.
Others
Other uncategorized cookies are those that are being analyzed and have not been classified into a category as yet.
SAVE & ACCEPT